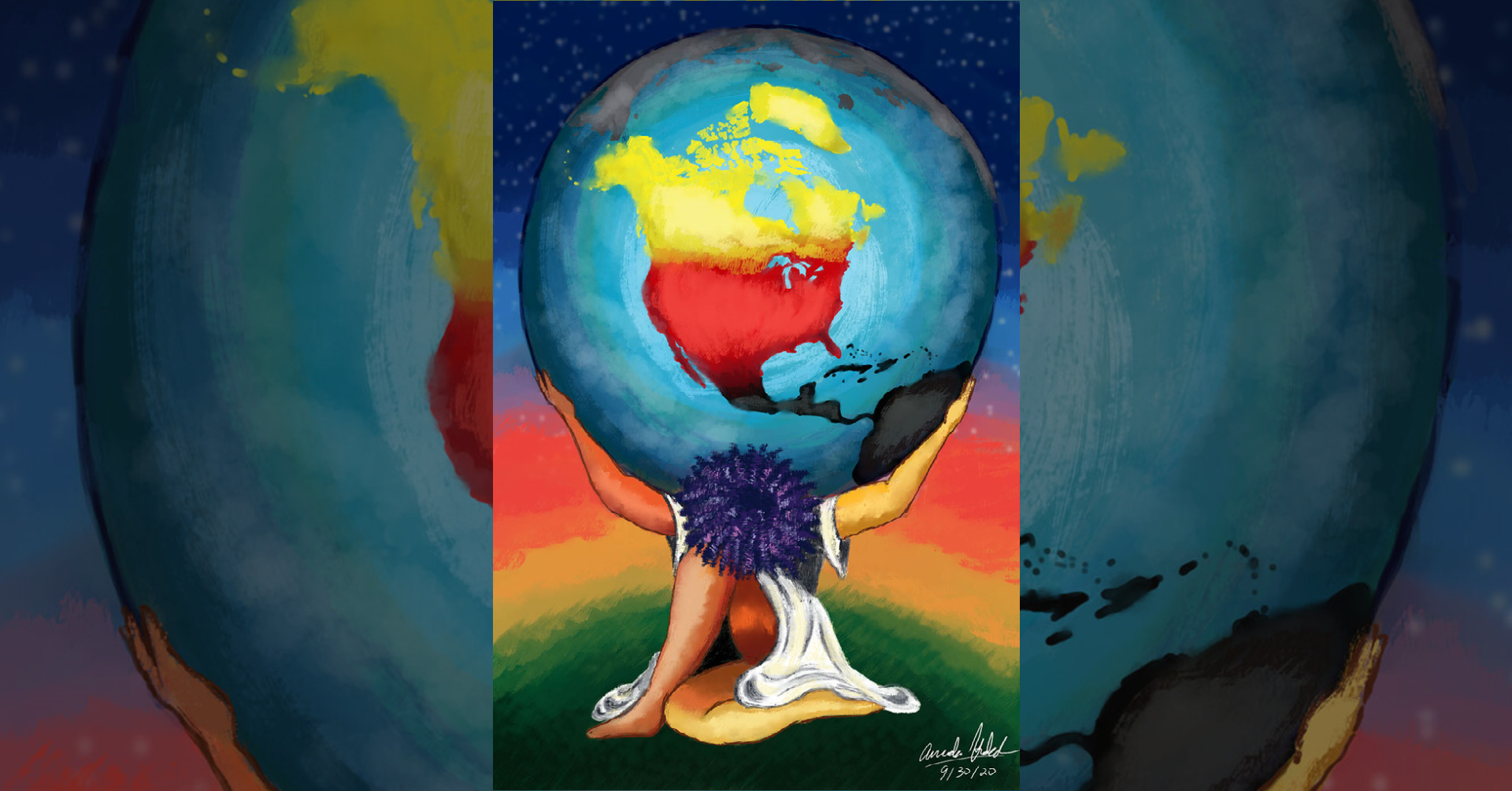 Throughout history, art has been used as an accessible tool for communication, raising awareness about social issues and affecting positive change. To demonstrate how art can be used as a powerful mechanism for expression, community conversations and change, the University of Michigan’s annual DEI Summit is themed “Arts + Social Change: Building an Anti-Racist World through the Arts.”

The Office of the Provost and Office of Diversity, Equity and Inclusion will host the campuswide community assembly and discussion as a virtual event from 10-11:30 a.m. Oct. 26.

“The virtual DEI Summit provides an opportunity for the university to highlight the progress we’ve made over the previous year, the changes we’re experiencing across campus, and the opportunities of continued engagement with our community,” said Robert Sellers, vice provost for equity and inclusion and chief diversity officer.

The event will feature a series of TEDx-style presentations by Courtney Cogburn, associate professor for social work and co-director of the Justice Equity + Technology Laboratory at Columbia University; Johanna Kepler, dancer, artist and activist; Colleen Medicine, director of language and culture for the Sault Ste. Marie Tribe of Chippewa Indians; and Wendell Pierce, acclaimed television and film actor.

Cogburn has been hailed as a pioneer for using virtual reality to expose the impact of racism on individuals, organizations and society and an expert on understanding how racism in the media affects human health.

She began her career by focusing on and measuring how racism affects the health and education of racial minorities, particularly African Americans. Cogburn’s research helps organizations better come to terms with knowledge and empathy gaps in identifying cultural and structural barriers that impede recruitment, retention and promotion of their increasingly diverse population of customers and employees.

Kepler is a recent graduate of U-M’s School of Music, Theatre and Dance. As a student, she founded Arts in Color, a student organization committed to diversity, equity and inclusion within the arts, for which she received the Martin Luther King Jr. Spirit Award in 2019.

Most recently, Kepler founded an interview series called “The Power of the Performing Arts: Uniting Artists While Apart.” The series documents the stories of performing artists from around the world during the COVID-19 pandemic to raise awareness of how the pandemic is affecting performing arts communities. 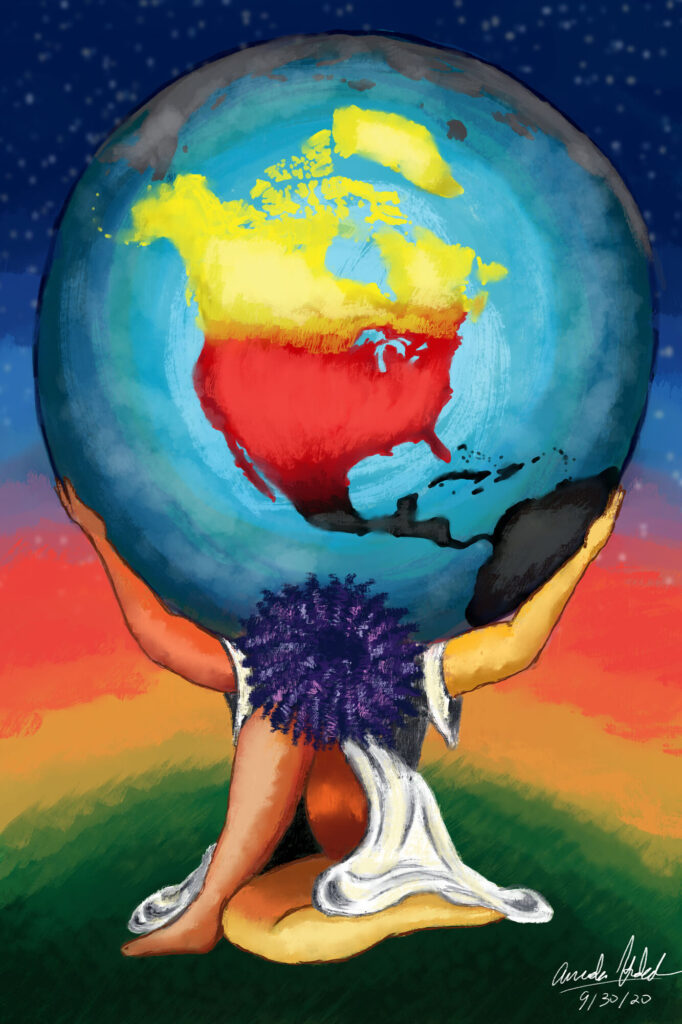 The Weight of the World,” by Amanda Hudeck

Medicine is a member of the Ojibwe Sault Ste. Marie Tribe and the tribe’s state historic preservation officer. She also is an artist in the Anishinaabe Theater Exchange, a U-M collaboration that uses theater to activate networks with Native American communities in the Great Lakes region and develops performances examining the social concerns and histories of the Anishinaabe people. The theater group, founded by Anita Gonzalez, professor of theatre and drama, is a consortium of people from various backgrounds working to promote dialogue about Indigenous culture and issues.

Pierce is a television and film actor who grew up in New Orleans before attending The Juilliard School for Drama. He has appeared in more than 30 films and 50 television shows, as well as dozens of stage productions. As a television actor, he became known for his roles in “The Wire,” “Treme,” and “Tom Clancy’s Jack Ryan.”

In addition to his acting career, Pierce’s resume includes a number of community development projects aimed at serving and investing in minority communities. Following riots in Baltimore after the death of Freddie Gray, Pierce invested in a $20 million apartment complex in Baltimore’s art district. The development is intended to create new employment opportunities as well as housing opportunities for local artists.

In 2008, Pierce started the nonprofit Pontchartrain Park Community Development Corp. that is dedicated to helping his hometown of New Orleans recover from the devastation of Hurricane Katrina. Pierce is currently a University Musical Society Digital Residency Artist.

“For me, the role of art is to ignite the public discourse,” he said. “Art is where we come together as a community to confront who we are as a society, to decide what our values are, and then to act on them.”

Following the individual presentations, the speakers will participate in a panel discussion moderated by Aaron Dworkin, professor of arts leadership and entrepreneurship at U-M.

Dworkin is a former SMTD dean, MacArthur Fellow, and President Obama’s first appointment to the National Council on the Arts. Dworkin also is the founder of The Sphinx Organization, a leading arts organization with the mission of transforming lives through the power of diversity in the arts.

To carry the event beyond a single day of engagement, a thematic website has been created to highlight the efforts of other units and departments also working in this space and acting as a repository for resources and creative contributions submitted by the campus community.

Artwork by Amanda Hudeck, public engagement coordinator at the Center for Educational Outreach.
Amanda Hudeck, public engagement coordinator at the Center for Educational Outreach, submitted this piece, titled “The Weight of the World,” as part of the DEI Summit. It’s described as “a tribute to the women who hold up the movements for equality in the United States and beyond. The colors are taken from the suggested colors for Black Lives Matter materials as well as the colors of several flags from African countries. The woman is rendered in reds and golds as if she were the sun — her radiance lighting the world.”
The site highlights several events hosted by different units on campus that also will provide a time and space for the community to come together to demonstrate a collective commitment to anti-racism. There also is a page dedicated to showcasing a number of arts initiatives and profiles of people, units and organizations affiliated with the Ann Arbor campus whose work or mission exemplifies the summit theme.

To further engage the community, summit organizers are inviting all members of the U-M community — students, staff, faculty and alumni — to submit an artistic, creative or innovative response to the event’s theme, “Arts + Social Change: Building an Anti-Racist World through the Arts.”

An online gallery featuring submissions from the campus community will go live on the summit’s website on the day of the community assembly. A number of the submissions will be featured during the virtual event.

Theme semester
Another key element of this year’s summit will be highlighting the university’s Democracy and Debate Theme Semester with Election Day just a week after the summit.

During the event’s community assembly and discussion, an emphasis will be placed on free speech and exchange of ideas, what it means to be a member of a democratic society, and democratic engagement from a global perspective.

“As our society grapples with such fundamental problems as the realities of systemic racism, the theme semester encourages our community to think collaboratively and creatively about how we can make long-term, sustainable societal change through the political process,” Sellers said.

This article originally appeared in the October 12, 2020 issue of The University Record