What do superstars Jamie Foxx, Jennifer Lopez, and Jim Carrey have in common? Their careers were launched from the 1990s sketch comedy show In Living Color. Created and written by Keenen Ivory Wayans, the show deliberately featured a diverse cast. The content and the cast were open to all backgrounds while being based in the black community. The hit show served as a talent incubator, especially for people of color who had been overlooked by much of the entertainment industry. In Living Color alumni have enjoyed success in comedy, film, live theatre, television, music, and dance.

STEM in Color, a new organization founded at the University of Michigan, is applying the same idea to professional development in STEM, centered on underrepresented minorities, and open to people of all backgrounds, races, genders, religions, orientations, and abilities. 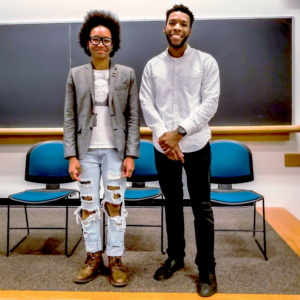 STEM in Color provides networking and professional development for all career stages – undergraduate, graduate, post-doc, and professional. Development is geared to facilitate transitions not only within academia but also from academia to other fields including industry, business, and law. To this end, STEM in Color will cultivate a rich network of leaders in STEM fields and beyond including entertainment, film, music, and sports.

From leaders of their respective fields, particularly people of color, members will learn about different paths to success, and how to chart their own path by bringing their authentic self to the challenges and opportunities at hand.

STEM in Color is the brainchild of Mel Sanders and Omari Baruti. Mel and Omari began discussing professional development between experiments in the research lab where they are both graduate students.

Prior to graduate school, Sanders completed her Master’s degree at Syracuse University and worked at Johnson and Johnson as a senior analytical scientist. Currently, she works with companies in the pharmaceutical industry as well as with public healthcare agencies to support efforts geared towards women’s empowerment, continuing diversity, and bridging partnerships between government, industry, and academia.

Baruti earned a four-year undergraduate research scholarship at Morehouse College and currently provides business consultancy for the nonprofit miLEAD Consulting with clients in biotechnology and biopharmaceutical companies. Both Sanders and Baruti approach graduate school with a wealth of personal and research experiences.
From those vantage points, they identified that STEM education in the academy, across all levels, is effective for developing technical skills and, in many cases, critical thinking and problem-solving. These skills are necessary, but insufficient, for long-term careers in STEM.

Sanders and Baruti recognized through their conversations that hiring managers in academia, business, law, and industry, recruit individuals who have the ability to communicate to a diverse audience, and possess technical, leadership, and interpersonal skills.

These conversations in the lab morphed into biweekly lunches. The lunches grew naturally with more scientists joining each time. Sanders and Baruti decided to formalize the structure, mission, vision, and culture of the group. At the time of their first official event, the group already had 35 members.

The inaugural STEM in Color event featured Cherie Dotson, Ph.D. from University of Michigan’s College of Pharmacy. Dotson received the 2017 Distinguished Diversity Leaders Award and, after sharing her own career path, led participants in a discussion of their individual journeys to and through STEM and the challenges that lie ahead of them.

The speed with which the organization grew into a formal entity highlights one of the key pieces of the culture of STEM in Color. No matter one’s current position, anyone can make meaningful contributions to diversity, equity, and inclusion. This organization empowers members to do just that.

STEM in Color may have been founded at the University of Michigan, but the needs addressed are common across the country.

Current priorities include planning and securing additional funding for the spring 2019 symposium which will be held in Ann Arbor. In the meantime, members can look forward to biweekly lunches resuming this semester. The first event of the fall was a luncheon with a guest speaker and panel discussion on navigating from academia to your chosen career path held Tuesday, October 23rd.

To learn more about STEM in Color, follow them on Twitter @STEMinColor_ or get involved by contacting stemincolor@gmail.com.

© 2023 The Regents of the University of Michigan