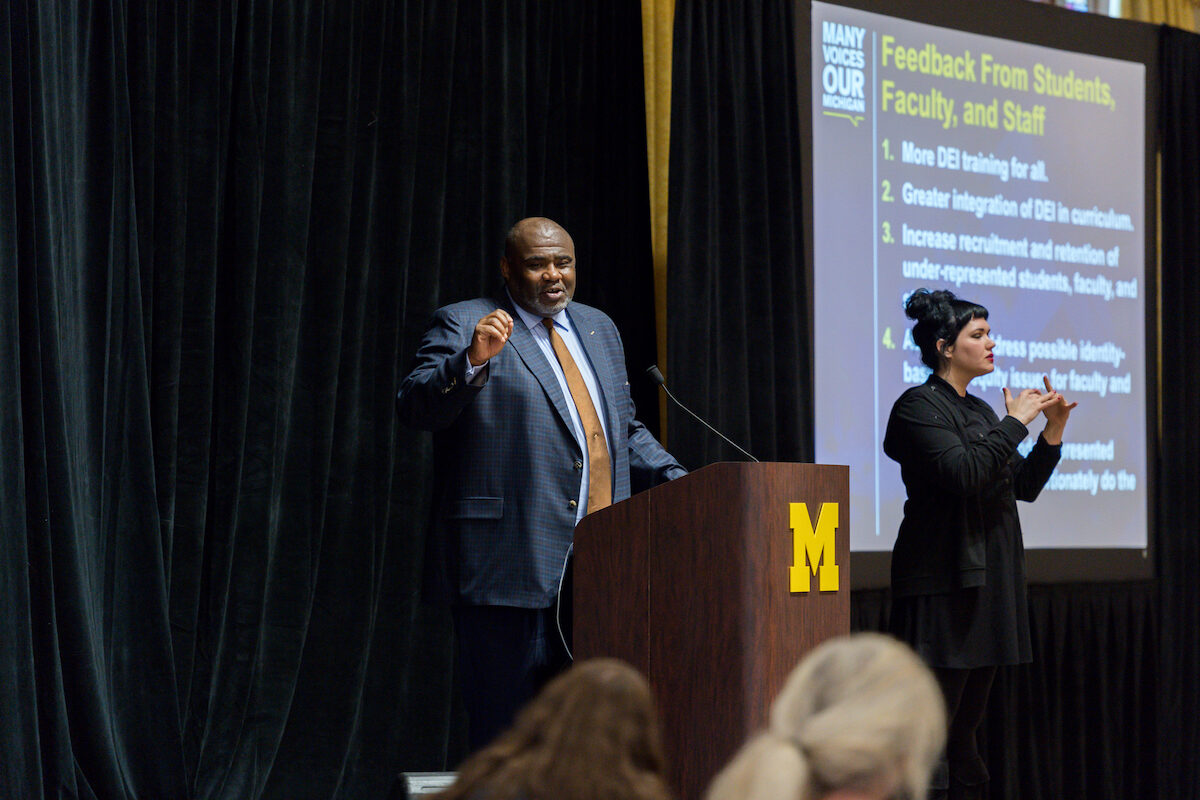 As the University of Michigan community completes its fifth year of a five-year plan for diversity, equity and inclusion, Robert Sellers announced he will step down from his role as vice provost for equity and inclusion and chief diversity officer to allow for “new leadership, new ideas, new energy and new perspectives” in the next phase of DEI planning.

“I have been blessed over these past seven years to work with thousands of staff, students, faculty and other university supporters who, each in their own way, have shown an amazing commitment to making the university a better place for all,” Sellers said in an email shared with colleagues this week. “While there is still work to do, I am very proud of all that we have accomplished.”

Sellers, who has been with the university for 28 years, will stay in the role through the end of the year — giving the university time to find a successor — and will remain a tenured faculty member in LSA’s Department of Psychology.

“I will go back to my faculty position and continue to work for greater access, greater opportunity and justice for all in all the ways that I can,” he said. “I will also work with my successor to ensure a smooth transition to our collective renewed effort.”

President Mark Schlissel and Provost Susan M. Collins acknowledged Sellers’ announcement in an email to the campus community and thanked him for his service and commitment.

“We commend Dr. Sellers and his team in the Office of Diversity, Equity and Inclusion, the DEI leads all across the Ann Arbor campus and the thousands of others who have played a role in the creation of programs and policies during these past years,” the president said.

The university will launch a search for a new vice provost for equity and inclusion and chief diversity officer from within the current faculty. More information about the role and search will be shared later this month.

The critical role includes acting as a member of the provost’s cabinet — assisting in all areas of academic affairs, including faculty recruitment and retention, tenure and promotion, and faculty development — as well as serving as counselor to the president on DEI-related matters and as the university’s spokesperson and advocate for DEI.

“While it truly takes each one of us to raise up the work of diversity, equity and inclusion at a place as big and dispersed as the University of Michigan, one person — Dr. Robert Sellers — has been leading this critical work with passion and dedication across our campus on a day-to-day basis,” Collins said. “Thank you, Rob, for all you have done and continue to do to make the University of Michigan the kind of community we all want it to be.”

During Sellers’ tenure as CDO, he oversaw the development and implementation of DEI 1.0, the university’s initial diversity, equity and inclusion five-year strategic plan, that launched under the direction of President Mark Schlissel in 2016.

The plan represented the shared and overarching themes and strategies represented in 50 individual DEI plans created by the university’s 19 schools and colleges, Student Life, Athletics, Michigan Medicine and other administrative units across campus.

Since then, the university has invested in new resources that have gone toward implementing initiatives that contributed to creating an inclusive and equitable campus; recruiting, retaining and developing a diverse university community; and supporting innovation and inclusive scholarship and teaching.

With Sellers at the helm of central DEI efforts, the university saw the creation of the Wolverine Pathways Program, the First Generation Gateway, the Go Blue Guarantee, the new Trotter Multicultural Center, the addition of a staff ombudsperson, the creation of the University Diversity and Social Transformation Professorships, the James Jackson Distinguished Career Award for Diversity Scholarship, and the LSA Collegiate Fellows Program, among many other initiatives.

In the fall, Sellers and his team in the Office of Diversity, Equity and Inclusion will share findings from the final year of DEI 1.0 and announce the beginning of a yearlong evaluation process and then a yearlong planning period for the university’s next DEI strategic plan, DEI 2.0.

According to Sellers, with the infrastructure already in place, the university’s DEI efforts will proceed and mirror the process of a university capital campaign. With recurring DEI strategic plans, the university community has the opportunity to rally around collective, coordinated, strategic efforts to achieve specific goals at both the university and unit levels for a specific intense time period.

Just as the university continues to engage in development activities between campaigns, it will continue DEI commitments between strategic plans including the work of the DEI implementation leads.

“The university’s DEI efforts are a perpetual work in progress, and we are committed to this ongoing journey and one where we never reach our destination,” Sellers said. “And let me be clear about this: While I am leaving my administrative role, I am not leaving the effort. I am just changing positions.”

This article originally appeared in the April 14, 2021 edition of The University Record