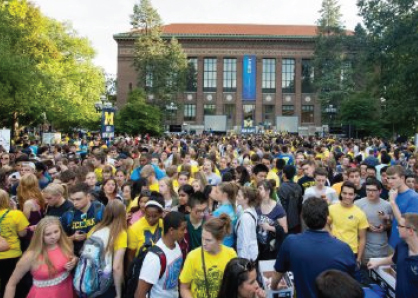 With the backdrop of a tumultuous presidential election and a tense political climate both locally and nationally, a recent survey by University of California-Los Angeles revealed that more than one-third of University of Michigan freshmen consider themselves in the “middle of the road” when it comes to their political orientation.

The Freshman Survey is an annual study of first-year college students across the nation and has been administered by UCLA’s Higher Education Research Institute for more than 50 years. The 2016 report is based on responses from 137,456 full-time, first-year students at 184 U.S. colleges and universities. From there, reports are compiled to show representations nationally as well as by school. More than 72 percent of incoming U-M freshmen, 4,886 students, participated in the survey.

The U-M survey showed that 20.8 percent of men consider themselves conservative compared to 12.9 percent of women. More women (53.6 percent) than men (39.4 percent) identify themselves as liberal.

An overwhelming majority of U-M freshmen said a tolerance of people with different beliefs is either a major strength or somewhat of a strength of theirs, as 75 percent of conservative students, 91 percent of middle-of-the-road students and 92 percent of liberal students affirming that.

Men are more likely than women to agree:

In addition to political affiliation and other topics, the survey gauged students’ concerns about college affordability and their emotional health.

College affordability was more likely to be a major concern for students who identified as:

When asked to rate themselves relative to the average person, only 48.6 percent of incoming U-M freshmen rated themselves as being in the top 10 percent or above average in emotional health.

Eight percent of incoming U-M students self-identified as having a psychological disorder and when asked the likelihood that they would seek personal counseling, 12.2 percent of U-M students reported there is a very good chance. The national response for that question was 13.9 percent.

U-M has participated in this study annually since 1993. While this year UCLA focused in on emotional health, political orientation and college affordability there is a wide range of issues covered in the survey such as why students chose U-M, academic preparedness and beliefs about their diversity skills.

The Freshman Survey is one of many forms of data collection Student Life uses to improve the student experience at U-M. For more information about student life research, visit studentlife.umich.edu/research.