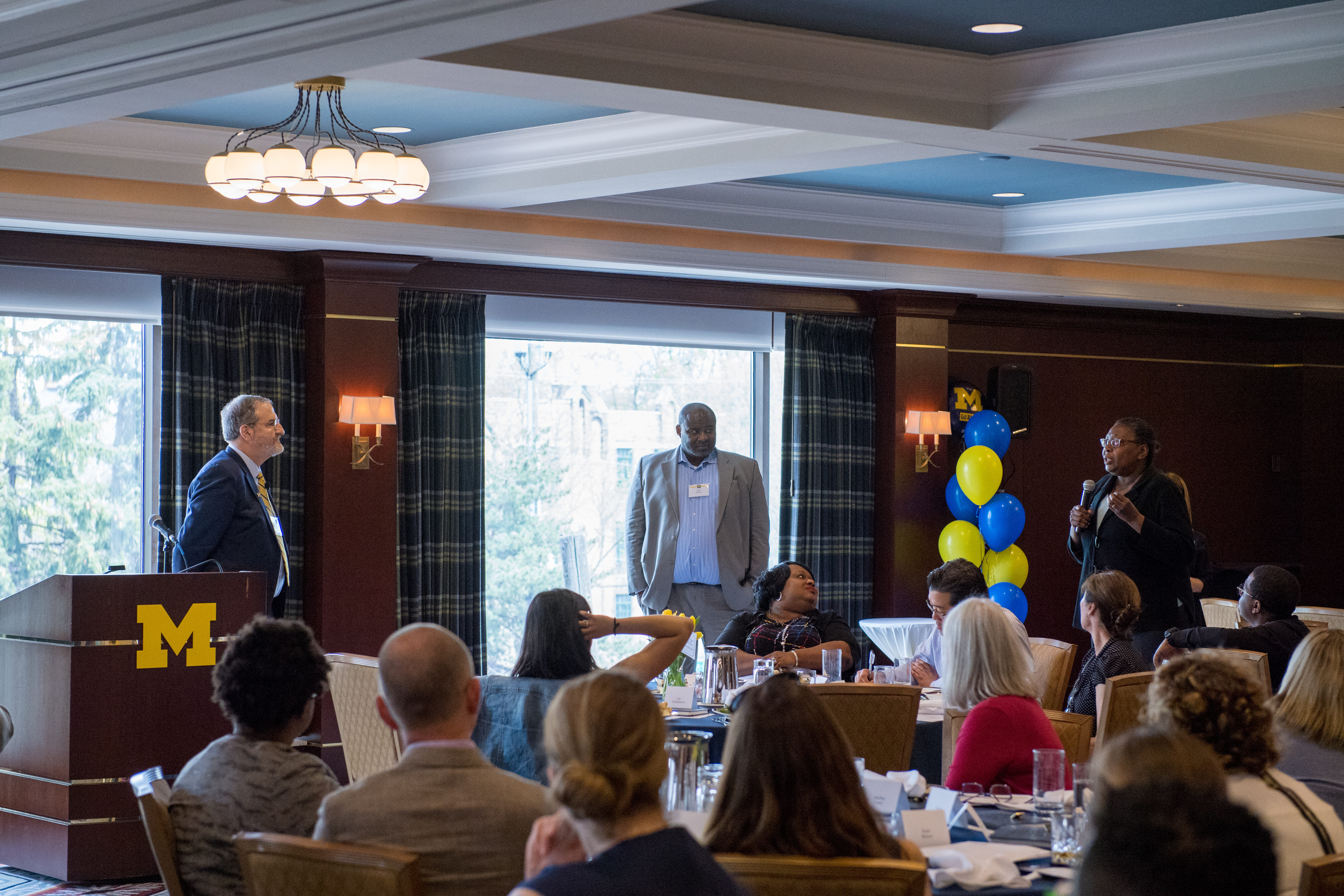 The balance between promoting free speech and diverse thoughts and ideas while still ensuring the university campus is an inclusive environment is not easy. Just ask the University of Michigan’s Diversity, Equity and Inclusion Implementation Leads.

The topic was the focus of discussion during a recent luncheon hosted by President Mark M. Schlissel.

Schlissel highlighted the natural tensions that exists among a legal obligation, the constitutional right to free speech and the moral obligation to be an inclusive institution that does not condone hurtful and toxic rhetoric.

“Free speech and inclusion are not mutually exclusive,” he said.

Creating an atmosphere where all students, faculty and staff feel they are welcome and can thrive is critical to the university’s DE&I efforts. However, the intersection of inclusiveness and free-speech is where U-M has generated headlines in the news.

Last year, a representative of controversial activist and white supremacist Richard Spencer sought to rent space for an event on campus. While the request was not denied, Schlissel consistently said the university would only rent a venue if the university’s Division of Public Safety and Security could assure a reasonably safe setting for such an event.

As a public university, refusing to rent space to Spencer could have sparked a lawsuit similar to the one filed at Michigan State University.

Dorceta E. Taylor,  James E. Crowfoot Collegiate Professor for Environmental Justice and director of diversity, equity, and inclusion for the School of Environment and Sustainability, directly questioned Schlissel on what she called the university’s “timid” response to Spencer.

“Let’s do like we do in football and basketball,” she said. “Bring it! I think the university underestimated the extent to which people wanted a strong response in saying, ‘go ahead and sue us.”

While Taylor’s sentiment drew cheers of support, Schlissel explained the rather fine line the university has to walk in order to foster a community that is diverse and inclusive but also respects everyone’s right to speak freely.

“The easiest thing for me to do would be to do exactly what you’ve suggested,” he said. “I would have been a hero and they would have had another banquet for me. But, I think it would have been 100 percent wrong.”

He explained that in the current climate, there is almost nothing more important to the work of DE&I than the first amendment, which guarantees the right of free speech.

“Who is it to have their speech rights shouted down when the country feels under threat if we don’t respect the first amendment?” Schlissel asked. “It’s Japanese Americans in internment camps, it’s MLK sitting in jail. There is almost nothing more important to the work we’re doing together than being able to stand up and say, ‘You and I are both free to express our ideas in public. You may hate what I say, I may hate what you say, but you can’t shut me up.’”

In a time of heightened social polarization, the free speech rights of disparate groups of U-M students is center stage.  A new lawsuit filed May 8 against the university argues the university’s bias response team has a chilling effect on speech on campus.

While the bias response team was created to enhance the visibility and coordination of ways to report incidents of bias and develop online content to provide the campus community with consistent and accurate information about reporting options and reporting resources, how the lawsuit will plays out is yet to be seen.

Schlissel said, “[The lawsuit] provides the opportunity for the university to standup for its values and explain to the boarder society that an inclusive environment is not inconsistent with celebrating the freedoms that we all share. The glass is half full.”