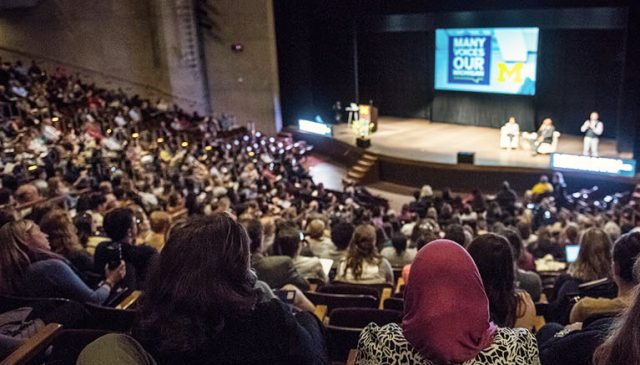 Engaging a campus – of any size, no less a large, decentralized campus – in a DEI Strategic Plan and Implementation process is a significant, multi-year endeavor. A key challenge is to make your DEI initiative stand out amidst many competing demands for time and attention.

A campus-level launch – and subsequent year anchoring events – provide a cadence for the year to year implementation of a campuswide DEI Strategic Plan. It gives your DEI implementation a burst of energy – an energy emblematic of the effort your Plan needs to succeed.

There are many ways you can approach developing a DEI Strategic Plan launch and anchoring event. The essential ingredients are that the event establishes the Plan’s prominence, launches the Plan, marks the Plan’s progress annually and propels the Plan forward year to year.

The U-M Office of Diversity, Equity and Inclusion (ODEI) has responsibility for the University of Michigan’s annual DEI Summit which served as our launch and now as our anchoring event in our five-year DEI Strategic Plan. Yet as the following section will demonstrate, developing and implementing this event involves shared goals and collaborations across the campus.

On a practical level, such an event affords a platform to formally announce the launch of a campus DEI Strategic Plan, and in subsequent years of a multi-year plan, to share progress and plans for continued efforts. On a symbolic level, it signals to your community the importance campus leaders place on DEI and the priority attention that the DEI Strategic Plan merits.

A launch event puts the wheels in motion, galvanizing the efforts of many who will engage in the work the Plan represents. In each year of your plan implementation, an anchoring event serves to re-energize and refocus the energy and efforts underway.

The primary aim is to increase awareness of the DEI Strategic Plan, but in addition, such an event can include opportunities for learning, reflecting, and generating new ideas. Your campus DEI Plan launch and anchoring event is both an opportunity to celebrate the diversity, equity and inclusion your campus has achieved and a time to recommit to addressing continuing or emerging issues and concerns.

Meanwhile, the marketing and communications necessary to promote the launch and anchoring event helps to broaden campus awareness of the DEI Strategic Plan itself, as well as publicizing progress reports or updates.

While you want to bring as many people to the event as possible, your communications provide those who do not attend with an awareness of the Plan and ideally, other ways they can engage, such as reading a progress report, signing up for a training session or attending other DEI events.

Through well-timed and inspiring communications to your community, you can build and maintain momentum throughout the duration of your strategic plan implementation process, while providing transparency and accountability through stories of progress and plans for addressing ongoing challenges.

To develop a launch and anchoring event for your DEI Strategic Plan, it is important to engage the same set of constituents who helped to shape the plan for their ideas and input on everything from the date and time to the event format and agenda. The event should reflect the interests of a broad spectrum of campus community members.

If you plan to host multiple events in a DEI week or month, it can be beneficial to look for synergy with significant DEI initiatives underway on campus and to develop collaborative programming accordingly.

For example, if your campus has been advancing its work on accessibility and addressing the needs of people with disabilities, choosing a program topic related to accessibility and partnering with those involved in the initiative can reinforce the work being done and demonstrate a coordinated campus approach to DEI work.

Do not underestimate the time and effort – and collaboration – that planning and executing a major campuswide event involves! Forming an event planning team including those whose jobs center on major events is strongly recommended.

Seeking input from various groups and DEI-related advisory boards will build buy-in and can extend your reach when it comes to publicizing the event. At U-M, the Office of Diversity, Equity and Inclusion (ODEI) gathers input from multiple advisory groups and formed a student advisory group to help guide our planning efforts.

We collaborate with many campus offices such as Michigan Medicine, Organizational Learning, Center for Research on Learning and Teaching, Division of Student Life, and numerous others to plan timely and compelling programming for the annual DEI Summit.

A DEI Strategic Plan launch and anchoring event can be a single gathering, a day of activities, or can take the form of a symposium, conference or summit. At U-M, we held a Launch Year DEI Summit which included a community assembly with presentations by campus leaders followed by a daylong series of campus events.

To mark Year One and Year Two of our Plan implementation, we held a DEI Summit Week, which started with the community assembly, adding a keynote speaker along with remarks by campus leaders followed by a week of DEI programs and events, some hosted centrally and others hosted by various campus units.

Based on community input, the DEI Summit was expanded to a month long format to enable people to attend more events over time. The Office of Diversity, Equity and Inclusion (ODEI) leads the planning for the annual DEI Summit.

The Deputy Chief Diversity Officer and a project manager have primary responsibility for the event, but a team effort makes it happen. Input is gathered from multiple constituents to select keynote speakers for DEI Summit events.

In Year One, U-M hosted noted author and academic Claude Steele, whose research focuses on stereotype threat. In addition to Dr. Steele, an inspiring alumni panel session featured alums from diverse backgrounds whose work has made a significant impact in the world.

In Year Two, activist and actress Diane Guerrero spoke at the community assembly, focusing on her experience growing up with parents who were undocumented and ultimately deported.

For our Year Three DEI Summit Month, CNN’s Van Jones served as the keynote. He spoke about the value of DEI for success in our global society and shared stories about his work ranging from addressing mass incarceration to environmental justice. A panel discussion followed, including Van Jones and student, staff and faculty panelists. Student performances have added an additional dimension to Community Assembly events.

Also in Year Three, a separate event was created for our Chief Diversity Officer to present a fuller progress update to the campus, so that the community assembly event could focus on the keynote address and brief remarks from campus leaders.

In addition to starting your planning process, ideally, a year in advance of your event (securing a large venue and a major speaker often require scheduling this far in advance), form a planning team and build a process that will gather input from multiple constituents, partners and stakeholders at all levels of the institution.

As you consider the design of your launch and anchoring event, aim to assemble an interesting collection of events that cut across diverse issues and topics to foster broad participation across faculty, staff and students. A key challenge is to find the sweet spot between the desires and interests of different groups. A set of activities and events can provide the balance and breadth you seek.

Of course, budget is an important consideration, and will impact the size and scope of what you plan to do, as well as the keynote speaker you can afford. Drawing from your alumni base, partnering with campus offices to pool funds, and building a grassroots coalition of support for what you are doing will go far in terms of attendance and engagement as well as keeping costs reasonable.

Plan your marketing and publicity concurrently with your event plan, as the two go hand in hand to create a successful outcome. As with any major event, it is critical to plan the work and work the plan. The stronger your planning process, the smoother your event implementation will be. Regular meetings, project management, and attention to detail are critical.

In addition to a centerpiece event (such as the U-M DEI Community Assembly), your DEI launch and anchoring event plans might include receptions with your keynote speaker (for students, especially, but also other invited guests), a luncheon or dinner for those centrally involved in your DEI work on campus, or other activities.

To manage the implementation of your launch and anchoring event, tap campus event planners and your campus communications team for expert guidance and assistance. At U-M, The Office of Diversity, Equity and Inclusion (ODEI) partnered with our Development and Major Events Office to handle logistics for the day of implementation of the DEI Summit Community Assembly.

In addition, the ODEI project manager took the lead to coordinate a multitude of event details. In addition to the Community Assembly event, the U-M DEI Summit offered a set of co-sponsored events with campus partners including Michigan Medicine, Division of Student Life, the U-M IDEA Board Disabilities Task Force,  U-M Human Resources and the National Center for Institutional Diversity.

Programs were scheduled throughout the month of October, with topics such as “Ignite and Implement: Student Engagement with DEI Initiatives,” “DEI and Faith in Secular Spaces: Respecting Religious Identity,” “From #METOO to #NOWWHAT: Cultivating Safe, Harassment-Free Learning and Working Environments,” and “Young, Gifted, @Risk and Resilient: Promoting Mental Health and Well-Being Among Students of Color.

In addition, units across campus offered an array of DEI sessions, workshops, trainings, film screenings, performances and more. The new session with Chief Diversity Officer Robert Sellers, focusing on sharing an in-depth progress update with the campus community, drew over 200 people (and some 1200 more via live stream) in the week following the DEI Summit Community Assembly.

Faculty, staff and students came together to learn about real progress being made as a result of the DEI Strategic Plan work underway. Yet the talk also emphasized that there was significant work yet to be accomplished. Those attending engaged in table discussions and generated ideas for the ongoing DEI Strategic Plan implementation.

There are many ways to measure the success and impact of a DEI launch and anchoring event. It is best to approach this evaluation in a multifaceted way, by considering the viewpoint of many different constituents as well as tracking concrete indicators where possible.

Certainly, metrics from website traffic and social media -and especially, actual attendance at events – provide important indicators of success. Qualitative assessment is equally important. Gathering feedback from all collaborators and from key groups such as student leaders, advisory boards, faculty senate or other faculty groups, and staff at all levels and across diverse job types helps to build a picture of what went well and where improvement is needed.

Assessing the effectiveness of communications as well as the events themselves is important. Celebrate what went well and remain open to what can be done differently in the future to better meet the needs and interests of your campus community.