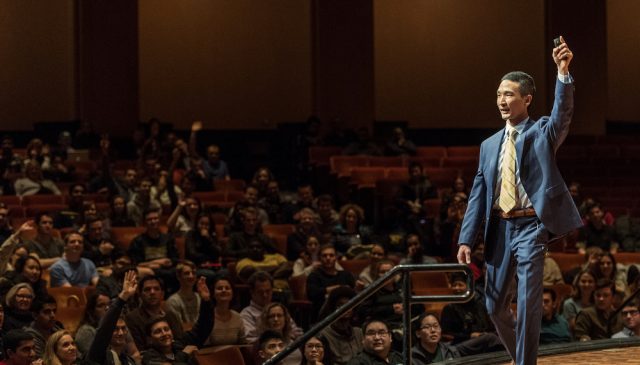 For over 150 years, faculty at the University of Michigan have made significant contributions to the advancement of diversity, equity, and inclusion (DEI) in academia.

These contributions have taken the form of scholarly inquiry related to DEI, inclusive teaching and mentoring, and service and engagement that have resulted in greater access and opportunity. Introduced in 2016, the University Diversity & Social Transformation Professorship (UDSTP) both honors and builds on this legacy of faculty achievement in DEI.

The UDSTP is an honorific designation for senior faculty who have, throughout their careers, demonstrated a commitment to the university’s ideals of DEI through their scholarship, teaching and/or engagement both on campus and with the wider world. Like other U-M named professorships, it is reserved for only the highest level of achievement.

The audience for the UDSTP includes faculty within the university and faculty worldwide who have made exemplary contributions to diversity, equity, and inclusion who are successfully recruited to U-M through posted faculty positions.

Collaborators include the U-M’s National Center for Institutional Diversity (NCID), the university’s Office of DEI, and schools and colleges campuswide.

In designing the fundamentals of the UDSTP, every effort was made to structure the award in ways that mirrored other named professorships at the U-M in order to confer and convey the same sense of inherent prestige and distinction. All details and benefits of the program were made commensurate with similar honors.

This included the structure of the nomination and approval process; financial resources linked to the professorship; release time from teaching to allow a semester-in-residence at NCID for scholarly collaboration and community-building; and even the timing of the award, which was aligned with the announcement window for other named professorships on campus.

Special consideration was also given to naming the professorship, and it was agreed that the word “transformation” should figure prominently in the title.

The planning team determined that UDSTP would be open to all senior tenured instructional, clinical and research faculty (associate or full professors) who are at least 12 years post-completion of their terminal degree. Candidates would be nominated by the dean of their respective U-M school or college.

Internal candidates must have a formal appointment in one of the schools and colleges on the Ann Arbor campus. These faculty must have outstanding portfolios with strong evidence of demonstrated achievement in promoting the values of DEI within their field and/or their university home(s).

Given the length of senior faculty recruitment seasons across schools and colleges, a distinct process is in place for the nomination of external candidates. Deans may nominate external candidates using an online portal from fall and through April 1 annually.

The final program structure included an honorarium for research and professional development, NCID Faculty Fellow status for the entire five-year term of the award, as well as one semester teaching release to allow professors to spend a semester in residence at NCID.

Individuals appointed as University Diversity & Social Transformation Professors hold this title as long as they have an active appointment as a faculty member at the University of Michigan. The Office of the Provost awards each honoree $20,000 per year for their first five years as a UDST professor. These funds may be used to support a range of activities related to their scholarly and professional work.

During the five-year UDSTP appointments, recipients also serve as faculty fellows at NCID. There, faculty fellows interact with other UDST professors and NCID faculty fellows as well as postdoctoral scholars and students through activities designed to promote community and creative networking.

Within these five years, and ideally within the first two years, UDST Professors will spend one semester as a Fellow-in-Residence at NCID, with no other teaching or administrative responsibilities at the U-M. This enables them to spend concentrated time devoted to their DEI goals immersed in an environment of other scholars committed to this work.

For faculty new to U-M, this semester in residence at NCID will also support their transition and enables them to make meaningful connections with colleagues and students.

As the UDST professorship is intended to support scholars with long-standing commitments and who have made significant  contributions to DEI across their careers, it was important to provide honorees not only with an affiliation with NCID, but also a concentrated period of time as fellows-in-residence at NCID, since the Center offers not only a community of peers and colleagues but also resources, programs and support services that bring together scholars at all levels, across disciplines.

Schools and colleges across the campus were contacted by the Office of the Provost to submit nominations for the professorship.

The description of the award and criteria provided in itself has likely made an impact across the institution given how it has encouraged institutional leaders to consider more closely the DEI related work of outstanding faculty members who might be nominated for the award.

The fact that this award is elevated to the same stature as other prestigious faculty awards also stands to impact the view of institutional leaders regarding faculty who engage in DEI work, that is, excellence and diversity do indeed go hand-in-hand.